So Much to Do...So Little Time

Oh, how I wish that I had more time to read all the blogs this week. We just wrapped up our PTA fundraiser which has kept me busy during the past 10 days. Not much time to sew. No time to sew this week either. The hubby and I are packing up and going to Hawaii on Friday. It's always more work to get things ready for a sitter to come than it is to take the whole family. I'm sure you're all feeling sympathetic, huh?

Here's a little "funny" for you to enjoy..... Some of you in the quilting world may have already seen this, if not I think you'll have fun watching The Perils of Sunbonnet Sue. (Make sure you have the sound on your computer turned on.) My daughter always gets a kick out of this!
Posted by Kairle Oaks at 3:51 PM 9 comments: 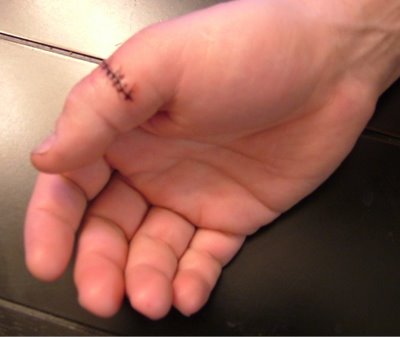 I've already told you what a great husband I have. Well, he's also a great dad. DH has always made it a priority to spend time building memories with our children. A while back, our youngest daughter decided that she was going to start saving her money to buy a cat condo. Now, was daddy going to let his little princess spend her money on such a thing? No! He told her that they could build one together and it would cost A LOT LESS MONEY! I'm sure you can already see where this post is headed.....

Yesterday I came home from watching our 12 year old's basketball game. I noticed when I drove up that the Jeep wasn't parked out in front, but that's the vehicle that our 16 year old drives so I assumed that she had gone to a friend's house. The garage door was open and all sorts of cat condo items were strewn about. When I walked into the house I had a strange feeling that something was not quite right. You know that feeling.

There were no construction noises. No noises at all, for that matter. The house was quiet. It wasn't long before I noticed splattered blood going up the staircase and followed it to the kitchen sink. Was this a crime scene?! I called DH's cell phone. When he answered I told him that I saw blood, but no bodies. WHAT'S GOING ON?! Our 16 year old was driving him to the ER. He had cut his thumb with a carpet cutter. OUCH!!! Good news...no one was dead! No police!

So here's how much we're into the cat condo now:
Parts and accessories: $75
New Ryobi cordless power tools: $185
Trip to the ER for seven stitches: $100

Needless to say, it would have been much cheaper to go buy the deluxe cat condo that they are selling at Costco for $114. They could have even made it a special trip buy stopping to get a burger, shake and fries. Of course, that wouldn't provide fodder for family fokelore. We'll always remember the time that daddy decided to save money by making the cat condo!

Here's the question that begs to be answered: Will those two ungrateful cats even use their future abode?
Posted by Kairle Oaks at 7:25 AM 14 comments:

I'm a lucky woman! I have been married to the same great guy for almost 22 years. DH's a hard worker and a supportive husband and father. Although he doesn't know much about quilting, he understands that it brings me a lot of happiness and brings out qualities in me that make me a better person. He supports me in all the things that I enjoy doing.

When I met my husband he used to do a lot of hunting and fishing. As our lives have gotten busier many of the hobbies that he loved have dropped from his life as family priorities have taken over. Occasionally he still makes his way to the mountain streams to see if he can outsmart those German Brown or Rainbow trout. Not often enough, though. Still, there is one thing that he makes time for each and every Fall. Pheasant hunting. It's the one thing that he has been able to do with his only brother that brings them together in a somewhat difficult relationship. It also ties him to the memories that he has of time spent hunting in the corn fields with his father. It's very common for him to stop along the roadside and watch the pheasants strutting through the nearby fields. 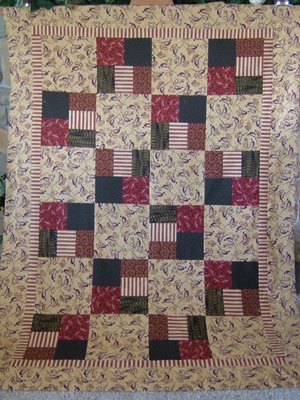 With this being the year that I am making a birthday quilt for each of my family members, I wanted to make something special for John. He has hinted that the little throw in his home office isn't big enough to cover him. Admittedly, I made it just large enough to cover our daughter when she curled up into his overstuffed chair to read.

So this quilt is just for DH. I will confess that it's not one of my favorite quilts. I'm not very fond of the pattern and I definitely chose the wrong fabric for the inside border. Nevertheless, I know that he will love it and that's what matters most.

Here's a close up of the fabrics that I used. I think that the pheasant fabrics are Granola Girl prints. The top still needs to be quilted.
Posted by Kairle Oaks at 2:00 PM 15 comments:

Making My Own Springtime

Boy, it's been a long time since I last posted. What a crazy week! A sick husband... a nine year old with a tweeked neck...two trips to the chiropractor for her...counting $$ each day for the school fundraising event...still more counting this week...

One thing that we did that was out of the ordinary for us was attend an Arena Football League game on Friday. Nashville Kats vs. Utah Blaze in the Delta Center. It was even better that the Blaze won!!! I was telling my friends this morning that it was like watching our boys play out in the front yard when they were younger. Fast paced and fun! Not to mention that they made up new rules. LOL! I'm not much of a football fan, but I would definitely go to another game! 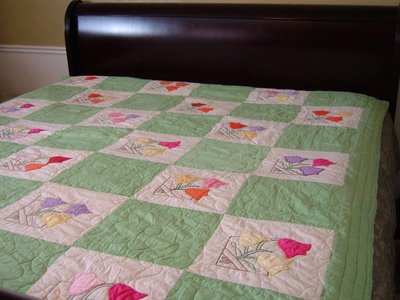 Well, I can wait for spring no longer! Since any hint of my flowering bulbs are under inches of new snow, I decided to pull out my tulip quilt. This quilt was made for my mother in 1956 by the ladies in her church congregation. I saw it for the first time two years ago when my mother gave it to me while cleaning out the basement after a flood. My parents' marriage only lasted five or six years, and I guess she's had this quilt in storage ever since. It has a few stains, but overall it is in pretty good condition. It must be a double bed size, as it barely fits over the top of my king size bed. 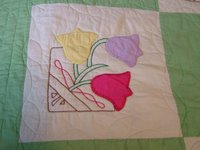 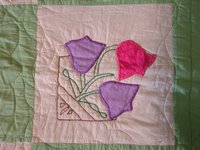 Here are a couple of close up shots of the blocks.
Posted by Kairle Oaks at 1:15 PM 10 comments:

Today I plan to March 4th and sort through my sewing room. I definitely need to reorganize and get rid of things that I no longer want or need. I've been putting it off for way too long.

Tonight while my DH is at the BYU basketball game I'm going to work on his surprise birthday quilt. He worked from home yesterday and had no idea that I was working on HIS quilt in the other room. I've got to lay all of the blocks out now but can't do it if there's a chance he could walk in and see it!
Posted by Kairle Oaks at 10:01 AM 7 comments:

I have to admit that binding is my least favorite part of making a quilt. I've probably made that confession many times. I guess the good news is that I'm getting better at sticking with it until the quilt is complete, lable and all. Below are a couple of wall hangings (I can never remember if that's one word or two) that I finished the bindings on last night. 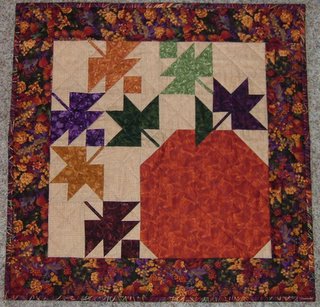 This fall wall hanging has been quilted since last September. It has also had the binding sewn on since then. For some reason I've got it in my mind that I had a piece of fabric all ready to attach for a sleeve on the back. After all this time I've given up looking for it and just decided to get the hand stitching done. You know that tomorrow I'm going to walk into my sewing room and find that hanging sleeve fabric sitting in the middle of the table! 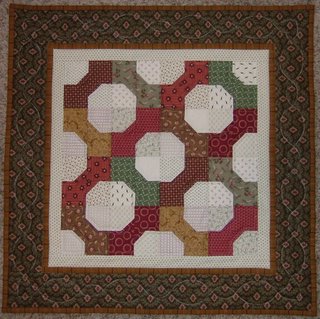 I stitched this wall hanging together last week and started quilting it. Wouldn't you know...as I was quilting the LAST bow tie I ran out of bobbin. No problem, I'll wind another one. No such luck! The bobbin winder on my machine had stopped working without any previous hint that it was sick. Grrrrr..... I took my machine in to have it repaired only to find out it will take TWO WEEKS to get it back. You might think that people who repair sewing machines for a living would realize that I can't live without my machine for two weeks. Good thing I have a back up (or two, or three). I think the bow ties will make a nice Father's Day gift.
Posted by Kairle Oaks at 8:36 AM 12 comments: